What am I living for
Yoon-Jung Jang, the hair stylist with menopause is getting to feel doubts about her life. She had a son Jin-Ho and a daughter Jin-Young after married 2-year-older church guy Il-Ro Lee in her age 23, and lived hard life earning money and taking care of family. However, she now only has almost 30-year-old son prepares for government official, 19-year-old daughter with lots of complains, and a dumb husband who doesn’t even care about her menopause at all. She felt so miserable that she doesn’t even remember when she was such a pretty girl ‘Yoon-Jung Jang’, who hoped for being a great singer. At that time, she was not just a guy’s wife, one’s mom, or one’s daughter-in-law. But surprisingly, she got an offer to be a trot singer at the music school where she enrolled for overcoming her menopause. Setting her mind on living a life just for herself in this time, she decides to become a trot singer even her family against her will.

Author, Woo-Mi Lee
Family is the closest, but is too hard to understand. What made us get so much tangled just because we are on the name of family? is not only a pretty normal family story but the story of each person who is feeling oppressed by the weight of life everyday even if each generation is different. Specifically this work is a kind of Jukebox musical which is composed of existing trot songs. 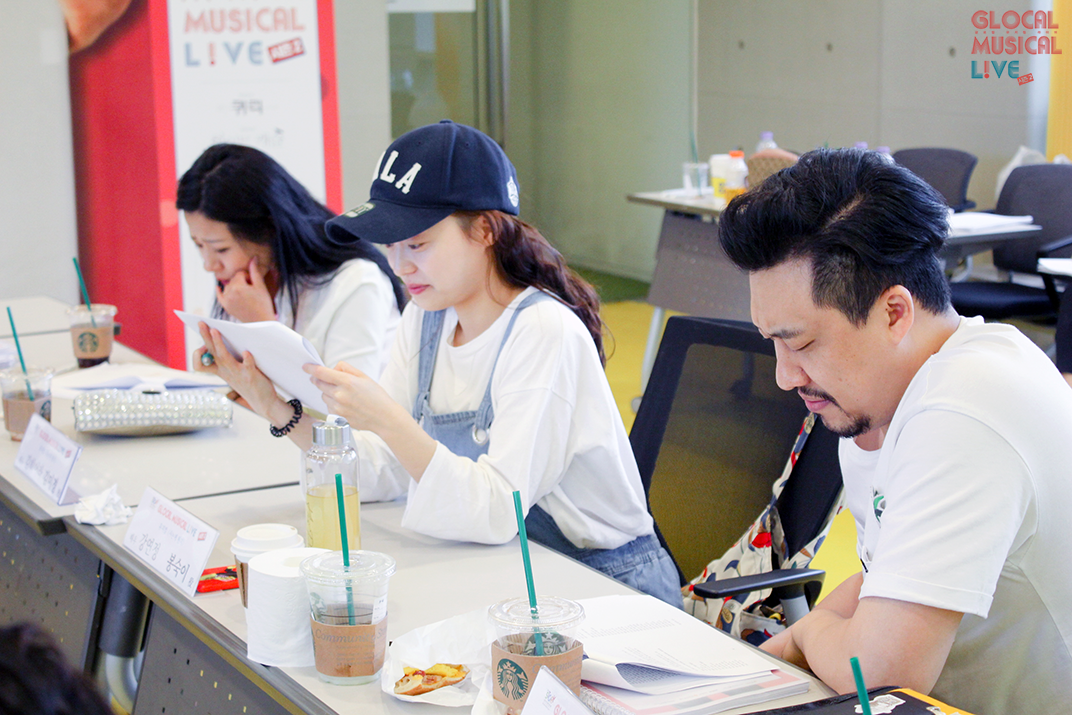 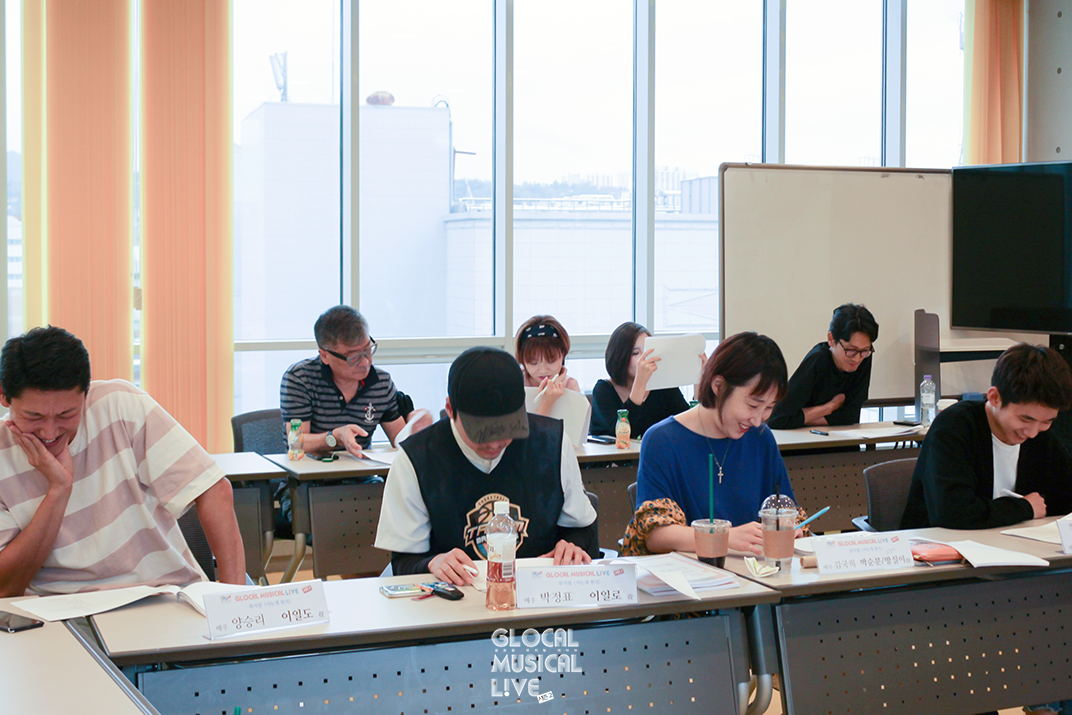 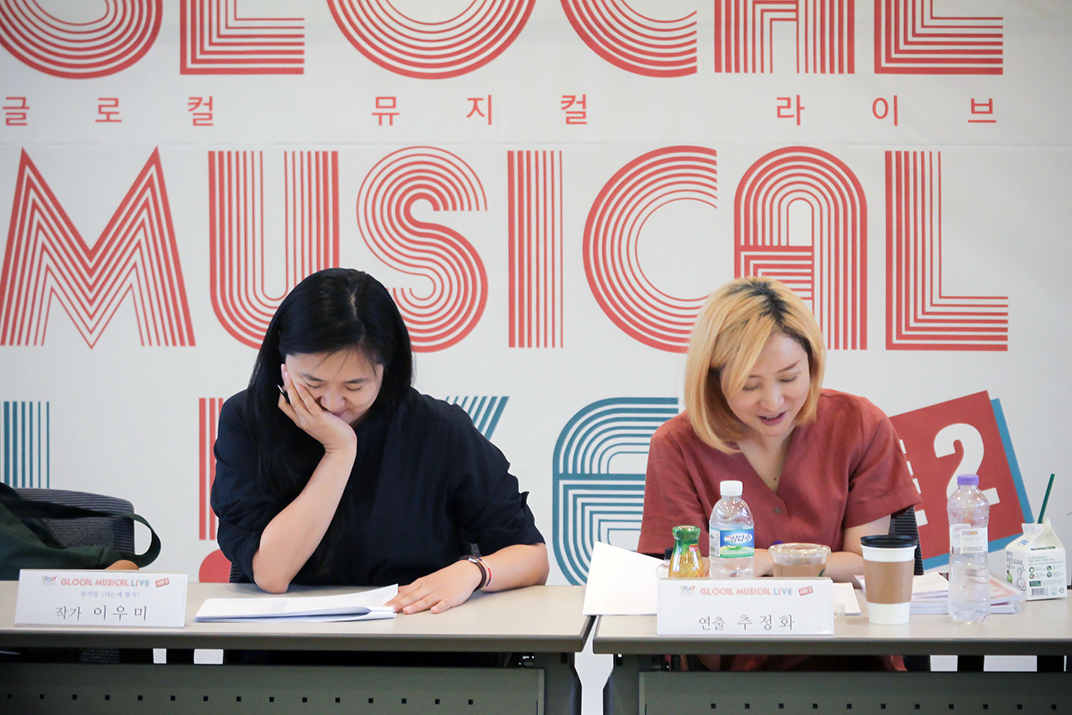 [What am I living for?] Table reading field sketch

The table reading of each 3 selected works for [Glocal Musical LIVE] Season 2 was proceeded on 14th and 16th of August, [What am I living for?] was the last among the first schedule. All of actors and actresses, Kook-Hee Kim, Seung-Ri Yang, Hyoun-Jin Kim, Youn-Jung Kang, Ok-Boon Koo, Jong-Hwan Won, Jung-Pyo Park, Heara Kim, Hyoun-Jin Kim gathered for this reading and read their scenarios by dressing their characters. Their scenarios were not bound with springs but stapled in a hurry. Because the author, Woo-Mi Lee revised this work a lot right before the reading except for the main concept which was the jukebox musical with family affection and trot music. Lee revealed her intention, “Any genre has its own stimulating story, however, I wanted to make this musical as warm as possible.”

The most attractive point of this musical [What am I living for?] was such a humorous dialogue. Director Choo said and evaluated positively, “The dialogue itself was so funny. It is just like our chat on the daily life.” Especially, people laughed out loud for the moment of argue between the childish daughter Jin-Young Lee (Youn-Jung Kang) who hopes to be a singer and menopausal mom Yoon-Jung Jang (Kook-Hee Kim).

Audiences will expectedly be refreshed by this musical which is rarely a jukebox style composed of trot music. The reaction and reputation of reading was also positive as well. Jung-Pyo Park put his opinion, “I am so glad these trot music even if I am not that much old enough to like”, and Director Choo also said, “This is very fresh trot musical. I was not a person to listen to the trot music, but I am so surprised that I found myself to enjoy this. Every single lyric was literary.”

Meanwhile, there were many different opinions. Many staffs and directors agreed the fact that some music which is not fit to the musical could decrease the completeness of this work. Hyoun-Jin Kim said, “There are some scenes which the music is not well fit to each scene. Unless revised, this kind of unnatural feeling such as the play and trot performance are attached could remain throughout the running time.”

So the first priority on [What am I living for?] is to connect trot music and drama harmonious. But it is hard to solve because the copyright problem occurs if the original lyric is revised. Director Choo advised, “It is time for you to find first the very fit trot song for each scene to solve this matter.” Each trot song currently for this musical is so attractive itself, however, each song should be carefully selected whether it fits to each scene for connecting existing songs and drama or not.

Byoung-Sung Park, director of [The Musical] also pointed out and said, “There are some scenes which are improper with the mood of songs. Audiences might be confused if a trot song which is not fit to the scene is played.” And he added, “Much deeper consideration is necessary about selecting songs as well as finding them.”