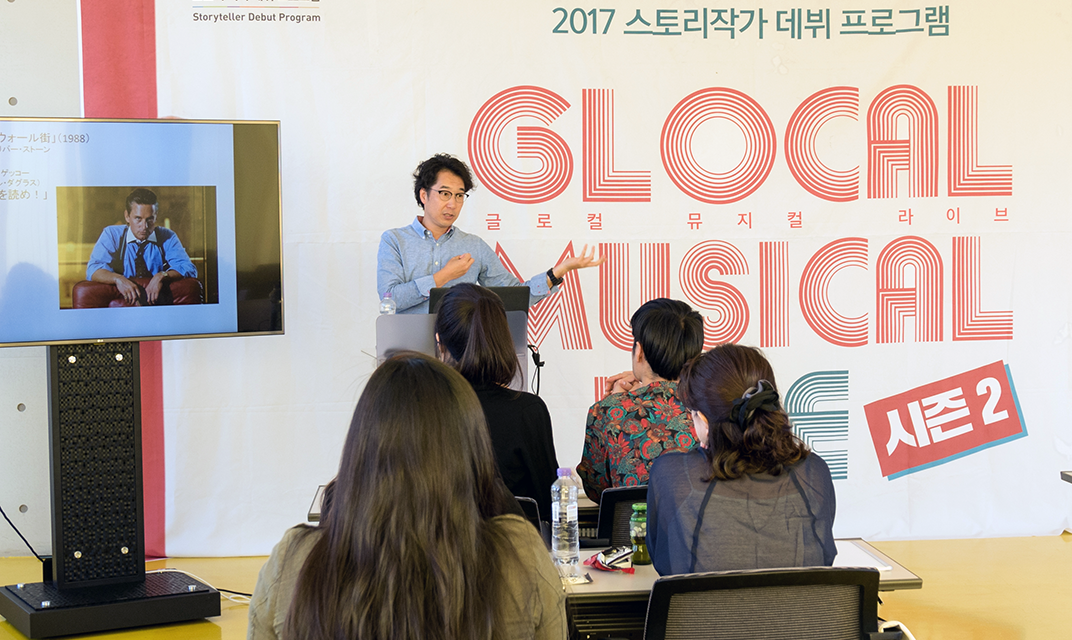 Bunch of strangers are gathered, Japan
Vice-president Oh explained, “There is an expression that you can always beat your enemy if you know about your enemy. The point of GLOBAL is to get to know about that country you enter and find the process its compatible strategy.” So to speak, it is important for each work’s globalization to analyze the characteristics of country and find out effective way to transfer for each country. So then it is granted to look around characteristics of society in Japan first for making successful strategy in Japan market. Oh started lecture by pointing out Japanese society and characteristics.

Lecturer recommended ‘WA’ which means respecting harmony as Japanese’s own emotion. Oh said, “Their emotion of WA expresses barely on the way of communication by Japanese. They say they are sorry so often, and this shows that the emotion of WA has been rooted strongly in Japanese society.” Oh’s opinion means that the reason Japanese say sorry even if they are not sorry is because of their concerns ‘What if they spoil the mood’.

But Oh analyzed, “WA has an optimistic meaning, however, it sometimes expresses somewhat pessimistic from time to time.” It means that the emotion of WA might be a reason to be obstructive to Japanese strongly. Oh compared, “Emotion of WA makes Japanese protect each other’s boundary, because Japan is a country which has full of strangers.”

Meanwhile, Korea was a sort of strongly bonded country to the lecturer. Oh said, “Korea is a country of cousins if Japan is a country of strangers. Each process of becoming familiar among people in Korea and Japan is totally different each other just like the distance between strangers and cousins.” Lecturer added, “There might be a trouble or conflict between Korean and Japanese without recognizing and understanding this kind of difference whether it’s for personal or for business.”

The Korean Wave which counter-attacked Japanese’ characteristics
Oh pointed out a difference of each society between Korea and Japan with some keywords such as stability, change, coexistence and competition. Oh analyzed, “It is so distinctive that Japan has a certain level of cultural structure. The trend of is something to do with this.” Oh held up as an example of convergence in advanced country with cultural contents by using huge popularity and usage of same language. Oh said, “Japan is such a unique country in the world which has a huge population more than 100 million people as well as using same language so that Japanese have over the certain level of literacy. Therefore the speed of spreading ‘trend’ is so fast.”

Vice-president Oh explained, “The new trend of women’s sexiness which was affected by is also totally opposite from Japanese’ previous thought that usually sexy woman is not smart.” Oh continued, “In some way, solved Japanese’s desire inside. Sexiness is such an essential keyword in entertainment business when coming up the ‘YONSAMA’ which was so famous to Japanese fans.”

Oh said, “Sexiness will play an important role in performing art as well. Actors on such a sexy dress can be the main reason which would satisfy and catch many audiences’ eyes. Oh finished lecture by saying, “I came to realize how powerful the sexy man is” during recalling the moment of musical .