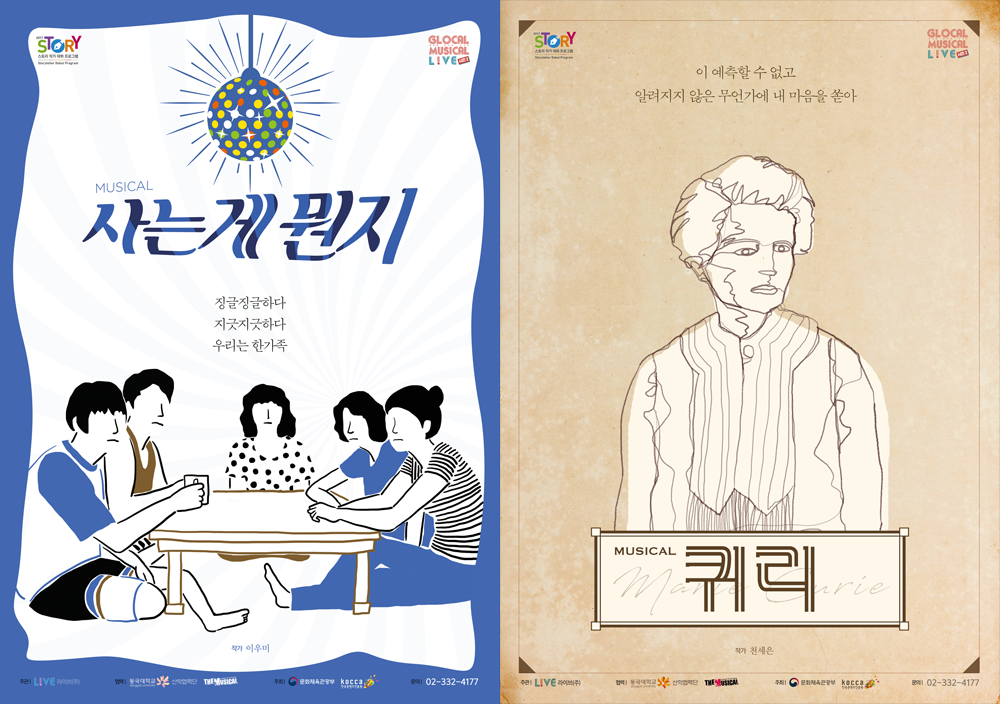 Potential creative musical supporting program both in domestic and global, [Glocal Musical LIVE] Season 2 has selected 2 musical works [What is Life] and [Curie] as the Showcases through its middle-term evaluation. This project started its registration in June 2017, document evaluation and interview selected 6 teams, and supported the program for each work’s creative funds ($5,000), lectures and mentoring.

This evaluation invited Byoung-Won Kang (CEO of LIVE corp.), Professor Dal-Young Jung and researcher Soo-Young Kim (Dong-Kuk University Graduate school of Media, Science of Arts and Performance), and composer Hye-Sung Kim as members of the judging panel. They interviewed the 6 teams’ final drafts and music for the [Glocal Musical LIVE] Season 2. The selection for the showcase was evaluated with each work’s potential, popularity, artistic value and possibility of theatrization.

Musical [What is Life] reminds the meaning of family on the process of a menopause woman being a trot singer by Woo-Mi Lee, the author who wrote this scenario, and Sang-Hun Jun, the composer who participated in arrangement. This is differentiated as a jukebox musical with existing musical numbers into trot songs. Musical [Curie] is a story about Marie Curie who was the first female scientist to get Nobel prize with the scenario by Se-Eun Chon (Author), and music by Jong-Yoon Choi (Composer). The work did not focus on Curie as a scientist, but on her personality and conflict inside.

The showcase of these 2 musical [What is Life] and [Curie] is scheduled in coming March 2018. These 2 works are going to be supported with translating into Chinese and Japanese and planned to go oversea markets as well. The LIVE corp. which is in charge of this business is going to support the rest of unselected works continuously for development and improvement as well.

Following is the general review of middle-term evaluation for [Glocal Musical LIVE] Season 2.

Such a great idea and various subject matters were shown on this [Glocal Musical LIVE] Season 2. The selected 6 works all have their own unique subject matters without any existing uniformity. Many works which were submitted on the middle-term evaluation through mentoring program have been revised and improved compared to their first drafts. Their story lines with characters became much clearer than before, and the structure of story and music became much firm so that the level of completion rose much higher.

After the judges discussed by hotly contested, [What is Life] and [Curie] were selected. We hope we could meet these 2 final selected works with much more completed performance at the showcase presentations. Also, since this is not the end but start line, so we hope the rest of unselected works could be revised continuously because every other work has its own characteristics and merits as well.