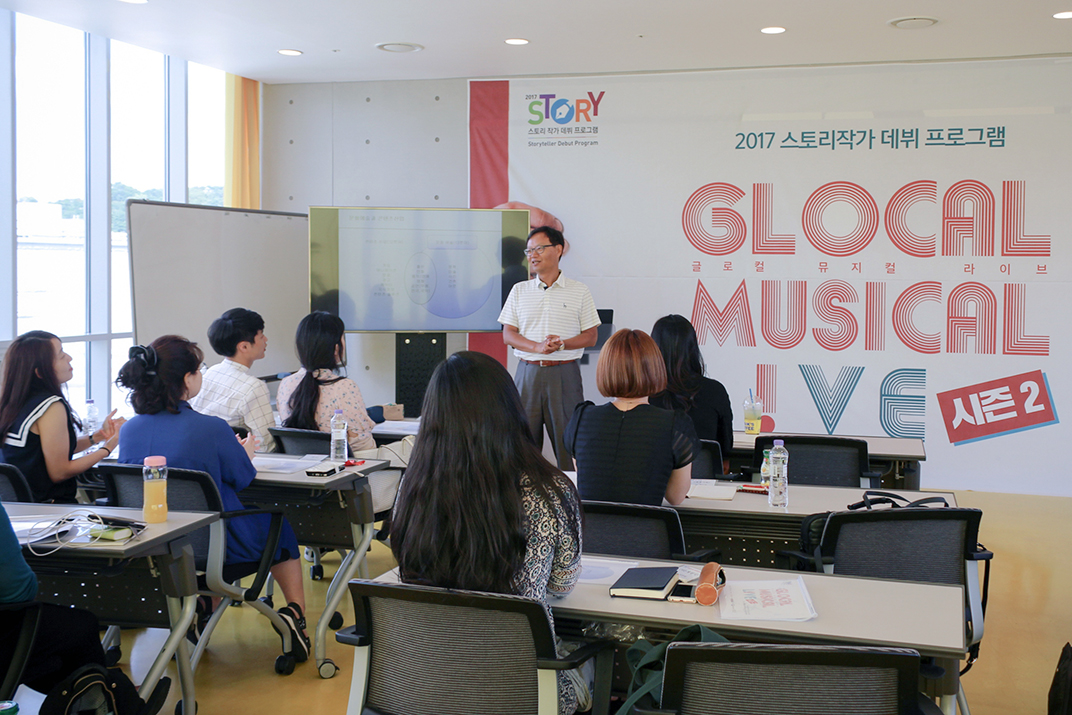 Storytelling author debut program [Glocal Musical LIVE] Season 2 arranged a schedule of total 7 creative lectures for nominated of 6 works. During the schedule from August to October, Dal-Young Jung who is a professor of for Art & Play at Dong-Kuk University, School of Media Art was chosen as the first lecturer. This lecture was progressed at 10th Floor of Contents Korea Lab in CACAO zone on August 11, 2017 with discussing about the subject, [International status of musical market & Finding idea].

Unfavorable condition of Performing arts market
Professor Jung started saying, “every time when I am on the stage to lecture like this, I’ve been always concerned between the matters to provide dream with hope and to face the cruel reality.” Because the status of domestic performing arts market he suggested was a lot dark and hopeless. Nevertheless, he emphasized the importance about facing the unpleasant reality. “The ability to understand about the musical and its circumstances for the better writing such as grammar is necessary for the higher level of vocabulary. So to speak, it’s to find out what the market and producers need, and to get to know about the grammar in the world. This is the reason for us to understand about the status and trend of performing art market.”

The income condition of each person who is working for this performing or art also makes the market darker and unfavorable. It is not that much worse compared to other literature, fine-art, crafts and photography, however, it’s not satisfactory at all. Some might think, “I am way better than this research graph”, but you cannot ignore the statistics. It might be closer to your wish. He focused that it’s too hard for the musical artists to live only with their scenario and music.”

‘The importance of timing’ through overseas musical markets
Professor Jung switched the issue to the musical markets in Japan and China. He said with motivating, “The circumstance is getting a little better than that of 5~6 years. People are changing their minds and attitudes about musical, so the musical performances and authors have been getting chances to show their potential.” He also added, “There were 2 works to go abroad to China in 2001, and only 1 in 2003 and 2004, but 4 works were went into China in 2013. The reason to make it double was because of the entire national supports. In case of Japan, 16 works have reached on the Japanese market in 2013 even if there were just 1 or 2 before. At that period it was a time for domestic small-sized creative musicals were vitalized, and K-POP idol stars also added their supports as well. However, whether the national support or vitalization of market and idols, now it’s only a matter of time.”

The advice how to find subjects for works was also somewhat related with the positive effect of 2.5 dimensional musical on the musical market in Japan. It was OSMU (One Source Multi Use) which is used as a commercial strategic plan by switching existing original material with its copyright into another material. In case there is an awareness of the original, OSMU is so effective to reduce marketing budget relatively. Also Jung said, “Of course I am aware that all of you hope to write what you want to write, however, sometimes you should write a work to live, or a work which producers want you to write. Then you often choose a way to script an existing successful work from another media. This could be one of the ways to find subjects, or ways to make your works for show easily.”

I hope this program would be a better opportunity…
Today’s lecture was finished with lots of cheering all the 6 selected works and professor, Jung’s experience. His experience was that Jung was a little bit tempted into compromise with the reality due to the low income even if he joined a theater right after graduating department of theater and film to work what he wanted to work. Meanwhile he got a chance to work for Sejong cultural center as an intern, and the satisfactory income by working there made him not to give up his dream. He said, “I might have given up working on this business unless I got a chance to work as an intern. Who knows I could’ve been selling vegetable at . I do hope that this program will be the best chance to all of you, just like I had my own chance.” And he added, “To make musical business bigger, people who live only by musical should show up. The industry always enlarges when there are many succession cases shown up. Please make your effort even if the market condition is unfavorable.”