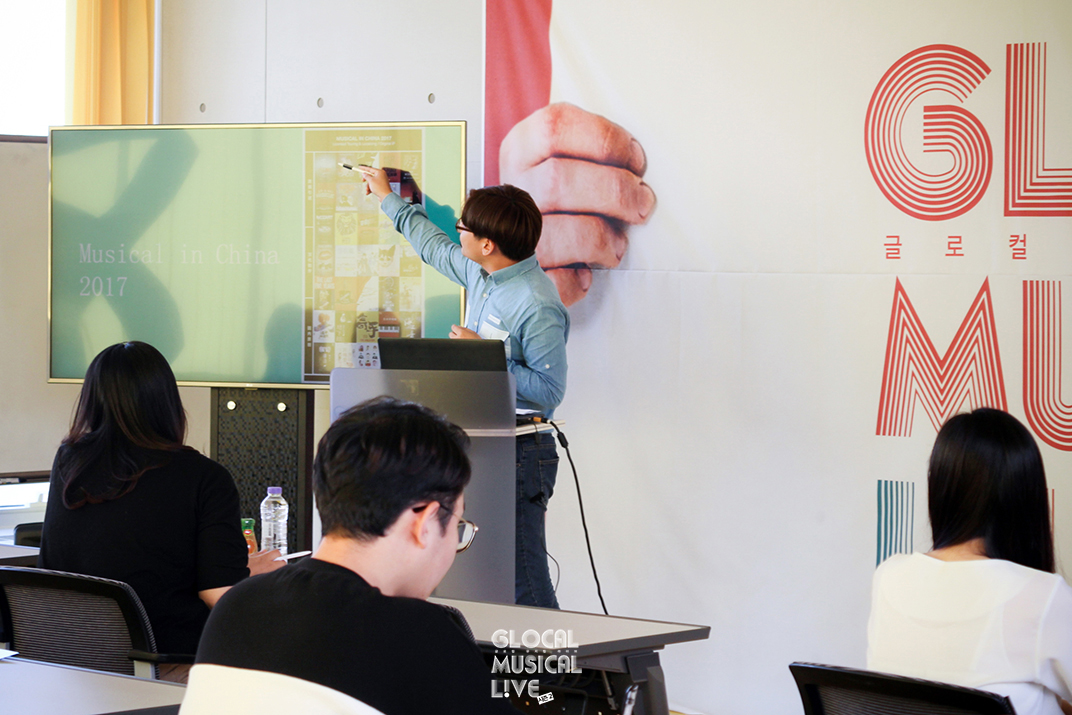 The second lecture was by the CEO, Wang Haixiao with ‘Direction of the Creative musical and Strategy to succeed in China’ right after Jung’s first lecture. He started his lecture with announcing that he has been getting more and more interested in China market for musical since he concerned about the oversea market expansion. He produced [The Wash] and [Thrill Me] and so on.

In case of the musical market in China, it was [Les Miserables] in 2002 which charged a role of license performance such as [The Phantom of the Opera] in Korea. It put the attractions of musical into so many Chinese who didn’t even recognize what the musical was. The tour for [Les Miserables] even made the first fan club, named ‘Aiinker(愛音客)’, and some of them are still working for the musical business in China.

It was [Thrill Me] in 2016 to make the turning point in the musical market in China after 2012. [Thrill Me] was such a revolution to around the musical market in China by appealing the attraction of ‘two-hander’ to the general audiences who have just known about the musical from Broadway or Europe and France. Wang added, “More and more audiences got interested in two-handers due to the success of [Thrill Me], therefore those attention became the driving force to play [My Bucket List] recently in Shanghai, and to make [Vincent van Gogh].

Overcoming Contents review system and language barrier
Wang continued his lecture and say that he was questioned “What kind of musical is famous in China?” by changing the subject. To succeed in China market, we should first grasp physiology of China market. He said that anyone should consider the contents review system in first when he expands his business onto China, because it is necessary to pass the consideration (review) for playing musical in China. Wang pointed out the unclearness of the contents review system in China as a problem. He said, “The standard of consideration is not quite obvious that people can hardly forecast which is passed or which is not. For example, everyone expected that [Mr. Show] would be successful in China. But the work was rejected just because it was too raunchy so it had to be revised for being played in China. Otherwise, people predicted [Thrill Me] somewhat pessimistically, but it was just passed. The standard is this much unclear in China. So all of you should be careful and re-voice your thoughts together if you want to play your works in China.”

Also Wang announced a problem of language barrier and emphasized that we should understand the characteristics of Chinese first. The first distinct feature of Chinese letters that they are ‘Ideogram’. “Korean letters are phonogram so that they can be written the way they sound. English titles such as [Wicked], [Lion King] can always be written in Korean letters. However the ideogram like Chinese cannot. So you will always face the problem to translate the title into Chinese letters. Then [Lion King] should be ‘獅子王’, [Dr. Jekyll and Mr. Hyde] should be ‘變身 怪醫’, [Wicked] should be ‘魔法女巫 (bad female shaman with witchcraft’ and so on.

‘Intonation’ is another distinctive feature in Chinese language and affected to the musical style in China. It means that the subtitle was necessary even if it’s played in Chinese. It is hard for Chinese audiences to understand when each word is put on its melody. Wang said, “We’ve once got rid of subtitles of [Thrill Me] on purpose to see how the audiences react. Some understood well, however some complained and asked us to refund. The process to solve this sort of language problem in China is this much complicated.” And he explained about the tasks to solve in the future musical market in China as well.

The future of Korean creative musical onto the China market
Wang’s lecture was finished with suggesting direction of our creative musical which is planning to expand onto China. He gave us two. The first one was the necessity of progress on the Korean art market. “The number of Chinese who visit Korea to watch acts and performances has been increased from the last 5 years. They say that they are quite touched by the play even if there was no subtitle for them to understand. I believe that Korean art and play market is enough to be worthy of progress in the future.”

He thought that going into the China license market is also one of the way Korean creative musical should advance. Wang advised that we’d better borrow such a famous story or a great person known to the world if we’d like to advance the license market in China moderately. He gave his opinion that the work with such a famous story wouldn’t have any distance toward Chinese audiences at all.